Memory of the Dead and Responsibility of the Living: Noh Suntag’s Forgetting Machines (2006-2007) 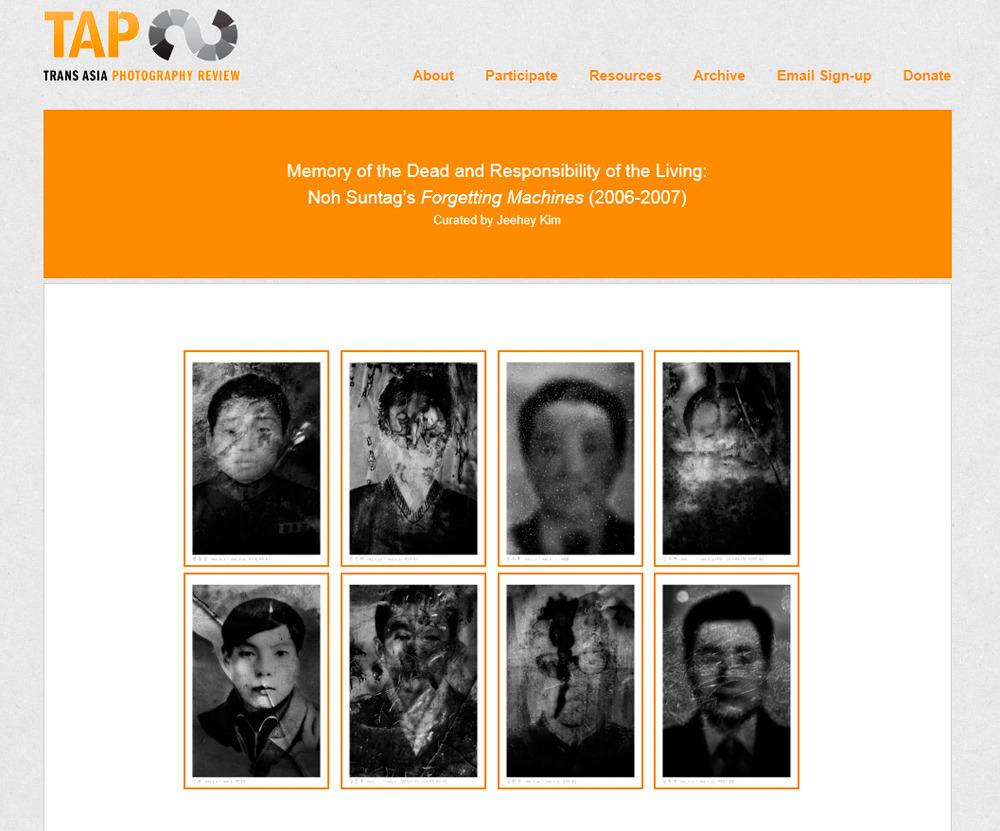 Memory of the Dead and Responsibility of the Living:
Noh Suntag’s Forgetting Machines (2006-2007)

Noh Suntag made The Forgetting Machines series (2006-2007) by retaking funerary photographic portraits put in front of the tombs of those who died during the Gwangju Democratization Movement in South Korea. The photographic images appear distorted, tainted, burnt, and even obscured with vapors. Noh did not retouch his photographs, but took pictures of the portraits (G) as they were.  1)

There are two cemeteries for commemorating the victims of the movement in Gwangju, the city where numerous civilians were killed by soldiers due to their demonstration against the military dictatorship on May 18th, 1980. What is called ‘the old cemetery’ is where the victims were temporarily buried, often carried in handcarts or trash trucks, while the atrocities were going on for ten days. The military dictatorship continued until 1987, and the massacre remained unrecognized during that time. May 18th came to be a national memorial day in 1997 when the new cemetery was established. The government asked the families of the victims to move the burial site from the old cemetery to the new one where they could have graves with tombstones and weather-proof funerary photo-portraits framed in stone. A number of the bereaved families refused since they had (G) not received any official apologies from those who were involved in the violent suppression, and currently the national ‘May 18 cemetery’ includes the both the old and new cemeteries. Noh took photographs in the old cemetery where the funerary photo-portraits, often housed in a glass boxes, were damaged by weather and temperature changes.

The funerary photo-portrait originates from the Korean concept that, at death, one’s being is transformed into an ancestor god. The portrait is related to the Confucian emphasis on rituals of filial piety. It is used in funeral and annual ancestor worship as a temporary shelter of an ancestor god. However, those who die in chagrin, such as by murder or unfortunate accident, fail to transform themselves into ancestor gods. Instead, they wander around, often threatening the living. Thus, the funerary photo-portraits serve the process of the dead gazing upon the living rather than the living gazing at the dead. Koreans prepare their own funerary photo-portraits when they are getting closer to the time they will become an ancestor god in their family, usually when they reach their 70s or 80s. In case of an unexpected death, an identification photograph is often used. In the old cemetery of Gwangju, one could witness numerous student identification photographs transformed into the funerary photo-portraits, as well as a wedding photograph used for the tomb of a young female victim. In fact, Koreans rarely have funerary photo-portraits around their graves. During the ten days of the democratization movement in Gwangju when hundreds of civilians were killed, funerary photo-portraits were put on the coffins or in front of the graves in order to identify the dead. The May 18 Memorial Foundation commissioned Noh to make a photographic record of the national May 18 cemetery, including the new cemetery, memorial hall, and large-scale statues evoking patriotism. However, the foundation did not accept his works, including The Forgetting Machines, since the images barely show the heroic achievement of the democratization movement and how true democracy was achieved in South Korea.  2 )

The Forgetting Machines calls into question what memorialization could achieve. A large number of memorials and commemorative facilities serve to make atrocities comprehensible, familiarizing us with what should never have happened. Noh’s works reveal an irony of remembering: The National May 18 Cemetery exhorts us to remember what happened during the demonstration. However, remembering accompanies forgetting. The Forgetting Machines attempts to reveal how institutions like memorials and museums, as well as the media, are complicit in forgetting to ruminate on the way the historical predicament happened, including the processes before and after its outbreak. In the name of memorialization and commemoration, several films were produced on the Gwangju Democratization Movement, often mystifying the event and emphasizing the sacrifices of the participants. Does democracy always require the sacrifice of the anonymous, making it natural for us to go through numerous actions of violence by the powerful? Commemorating those who were targeted by violent suppressions often results in a mere spectacle for those who did not experience the atrocity, including those in the First World rather than a systematic consideration of its causes and effects.

In his book “Remnants of Auschwitz: The Witness and The Archive”, Giorgio Agamben explores how terms like sacrifice and responsibility are used in a confusing way in that one originates from the idea of a religious death but has been used in relation to historical victims such as those killed in the Holocaust, while the other has a necessary implication of legal obligation rather than the mere feeling of guilt. Agamben points out that this kind of confusion often evokes a naïve humanitarian sense of collective guilt rather than recognizing how different ethical categories are from juridical categories, as well as how the idea of law is often mixed with the concepts of truth and justice.  3 )

Some of the bereaved family’s decision to stay in the old cemetery jeopardizes the idea of forgiveness, refusing to let the massacre be concluded as an event of the past or as one of the unavoidable processes toward the peace and democracy of South Korea.

In addition, Agamben calls archival projects commingled with witness and testimony into question, pointing out the non-coincidences of the whole and the part as well as the necessity of attention to something in between the dead and the survivors. As an ethical process, he also emphasizes the impossibility of making a distinction between the human and the inhuman, revealing a gray zone between the insider and the outsider, terms which often refer to those directly involved in historical afflictions and others like onlookers. The Forgetting Machines challenges the archival project of enshrining historical victims which often leads to a clear demarcation of the insider and the outsider.

In the National May 18 Cemetery, a funerary photo-portrait enshrinement hall was established next to the new cemetery, where visitors could pay silent tribute in front of the victims’ photographs instead of visiting each grave. In contrast to the enshrinement hall, in the old cemetery, visitors should pay tribute in front of each victim’s grave, often before a damaged funerary photo-portrait like the ones in Noh’s works. Some of those who died in suffering remain wandering around in the old cemetery while, ironically, others are worshipped as honorable ancestor gods and national spirits symbolizing patriotism in the new cemetery.

Noh’s retaking of vernacular photographs is related to the strategy of doubling, which is an attempt to intervene in the way funerary photo-portraits are used in memorial facilities. Rather than mere copying, Noh’s reframing of portrait photographs functions as a supplement a la Derrida. 4)   Personally unknown but historically known to most people, the faces in The Forgetting Machines urge us to learn how to gaze on them rather than to worship them as heroes.

_
* Jeehey Kim is a PhD candidate at the Graduate Center, City University of New York. She is writing a dissertation entitled “Death and Photography in East Asia,” which is on funerary photo-portraiture in the region.