In Fierce Opposition to a Muslim Center, Echoes of an Old Fight 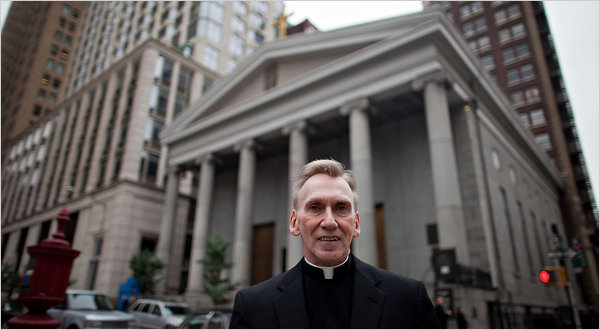 In Fierce Opposition to a Muslim Center, Echoes of an Old Fight

Many New Yorkers were suspicious of the newcomers’ plans to build a house of worship in Manhattan. Some feared the project was being underwritten by foreigners. Others said the strangers’ beliefs were incompatible with democratic principles.
Concerned residents staged demonstrations, some of which turned bitter.

But cooler heads eventually prevailed; the project proceeded to completion. And this week, St. Peter’s Roman Catholic Church in Lower Manhattan — the locus of all that controversy two centuries ago and now the oldest Catholic church in New York State — is celebrating the 225th anniversary of the laying of its cornerstone.

The Rev. Kevin V. Madigan, who is the pastor of St. Peter’s, said that when he began reading about the history of his church early this year in preparation for the anniversary on Tuesday, he was not initially struck by the parallels between the opposition it had faced and what present-day Muslims have encountered in proposing a community center and mosque near ground zero.

“There was no controversy when they first proposed it, and we were just pleased to have a new neighbor,” said Father Madigan, whose church, at Barclay and Church Streets, sits two blocks from 51 Park Place, the site of the proposed Islamic center. Both are roughly equidistant from the construction zone at ground zero.

But as an uproar enveloped the Islamic project over the summer, the priest said he was startled by how closely the arguments and parries of the opponents mirrored those brought against St. Peter’s in 1785………………………..(후략)